The American Library Association Annual Conference, held this year in Chicago from June 22 through June 27, featured 144 poster presentations on a variety of topics. Among them was a poster I created, entitled ”Interdisciplinary Community Service and the Library: Crime Camp.” The conference usually attracts roughly 14,000 librarians from across the country, and this was my first presentation in front of a national audience. Nervous? Never! 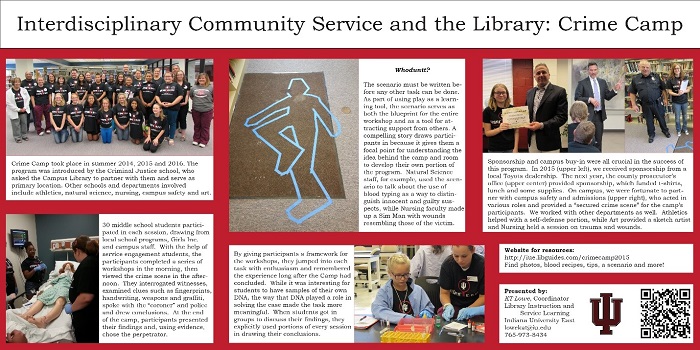 Crime Camp was originally developed in 2014 as an interdisciplinary partnership between the library and the criminal justice department. As it continued into 2015, however, the library sought out sponsorships and participation from community partners as well as the assistance of other departments. I also wrote a scenario for the 2015 and 2016 Crime Camps so that the skills the participants were learning would serve an end goal. In both cases, the scenario was a murder, one rendered in such a way that people even 50 feet away might not hear much, if anything. The scenario not only tied the program together, but also gave other departments ideas on how to work with the participants. Natural Sciences, for example, took the suspects outlined in the scenario and used blood collected at the scene to prove that blood typing was not enough to render a person guilty of a crime. This gave them the opportunity to show participants how DNA was an additional tool to help identify the perpetrator. 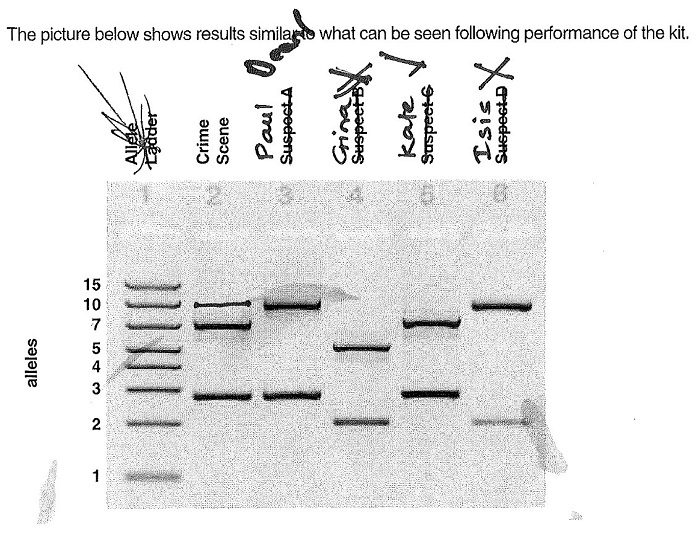 (Above: the DNA chart used to isolate the suspect in the murder of Paul. If you compare the data, you’ll see that Kate was the murderer.)

The presentation was viewed by librarians from academic, public and school institutions, many of whom expressed an interest in seeking out ways to bring it to their communities. Since our program worked with so many partners, including art, athletics and campus safety, as well as county government, many opportunities exist for connectivity on a number of levels. The presentation was received enthusiastically by attendees, and resources are available on the Crime Camp Libguide.

Crime Camp workshops included Fingerprinting (above), Profiling, Interrogation, Sketch Artist, Nursing/Triage and Self Defense. A special lunch talk on bringing criminals to trial was delivered by the Wayne County Prosecutor.

Would you be interested in learning more about campus/community partnerships? Do you have questions about incorporating library resources in your programming? Have a question about how Crime Camp worked? Looking for information on criminal justice? Ask us! iueref@iue.edu.