Perhaps your class has met in the Blakey Research Room in the Library. Or, you’ve noticed the sign there and wondered “who is George Blakey and why was this room named after him?”

Professor George Blakey provided many strengths to the IU East community. He helped IU East remain a focus of higher education in this area of Indiana. His teaching charisma brought students and learners to IU East. He was dedicated to the campus and the Richmond area. Professor Blakey encouraged and supported the IU East Library and Archives through development and committee work. He was active in securing the collections that were donated to the archives and created the Regional History Archives. In 1975 he received a Lilly Fellowship to study non-traditional avenues of history such as architecture and oral history (Pal-Item, 1975). Because of his work in this area, oral histories, including tapes and transcripts, are available for researchers. Blakey worked with his students to collect oral histories in Richmond including several individuals interviewed about their role in response to the 1968 explosion. Professor Blakey secured other collections that include the papers of three former editors of the local paper, the Palladium-Item. 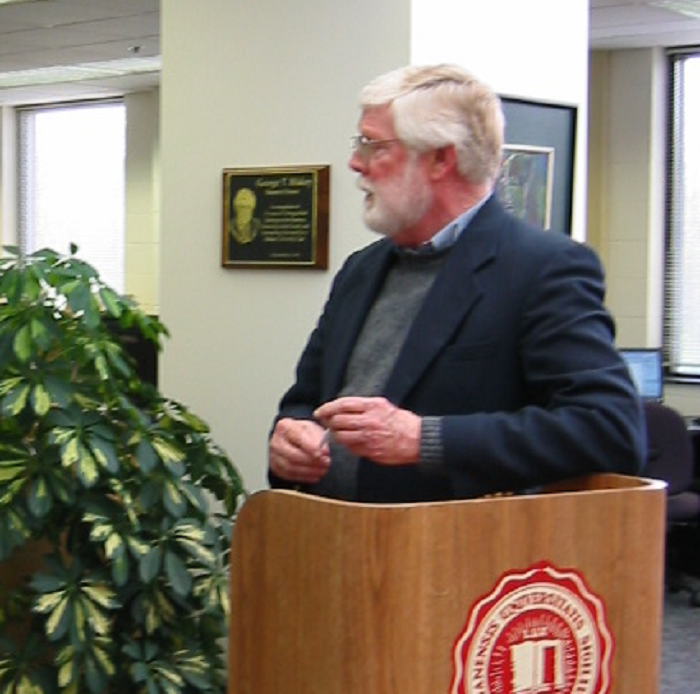 His lectures to students over his 30 plus years of teaching were informative and entertaining. His language and presentation had a way of taking students into history, presenting history as if he were on-stage. His habit was to write the overview/outline of the lecture on the chalkboard. It seemed like the timing was choreographed with erasures and additions to the board, underscoring the importance of it like a metronome. As he spoke, his enunciation and diction were used in keeping the lectures interactive, thus keeping students focused. I can still see Professor Blakey telling the class about traveling to Indianapolis and getting in the midst of a Ku Klux Klan parade at the Circle, his chalk circling the monument as he explained his attempts to break from the parade. He said, “I was mortified” at being caught in the unpopular and unfortunate protest.

A true scholar, Professor Blakey had a life-long relationship with books that naturally “placed him in the circle of library supporters.” At IU East he worked with three different library directors to ensure students had access to the best learning resources the library could provide. He served at least two terms as Chair of the Library Resources Committee (AY 76-77, AY 81-82) and served as a committee member or ad-hoc member for several different academic years. In 1981, he led the Faculty Senate Retreat session on Library Issues. During his active years the Learning Resource Center grew and eventually became the IU East Library. Through-out his time at IU East he advocated for student users, student identified hours of service, and new technologies (e.g. films & videos). Early in IU East’s history, when he was not on the library committee he was copied with minutes and details of the collections.

Professor Blakey personally purchased books and added them to the collection to support history courses, many times multiple copies so the students had time to use them. The IU East Library grew from a small under-sourced facility to one that provided relevant resources for course support with the help of Professor Blakey. My first library tour as student was conducted by Professor Blakey. Our research project was to select an individual in U.S. History from a suggested list. He took us through the library resources students needed to complete research papers, from reference books to newspaper fiche/film. He led the class through the library to all the special areas to find historic evidence, diaries, letters, speeches, and images. He introduced the class to interlibrary loan staff and practice. When Professor Blakey did not have library resources to direct students to, he would arrange trips around the region to view the real thing. He expected excellence from his students. In turn, he gave students excellence.

A specific project he supported was the campus archives. In 1975 Blakey received a Lilly Grant to learn more non-traditional methods of history. Through this he became a shepherd of history, preserving historic memories of the region through oral histories and paper collections. This activity was in preparation for the Nation’s Bicentennial. The Richmond Mayor’s office and IU East students helped with this project. The oral histories became the core of the Regional History Archive. The oral histories are in two parts, one regional (eleven histories) and one based on the 1968 explosion in Richmond, IN. The regional history list of individuals interviewed identifies a mix of professionals and non-professionals. The next group of oral histories included the 1968 explosion of 15 individual interviews. There is a guide to the oral histories and the cassette tapes are in the process of being digitized.

In 2001 Professor Blakey retired and his formal work at IU East was ending. To celebrate his contributions to scholarship and his commitment to library resources and services, the decision was made to honor Professor Blakey with a plaque that expresses appreciation for all his work on behalf of students and the Library. The Plaque hangs in the George T. Blakey research area to this day. 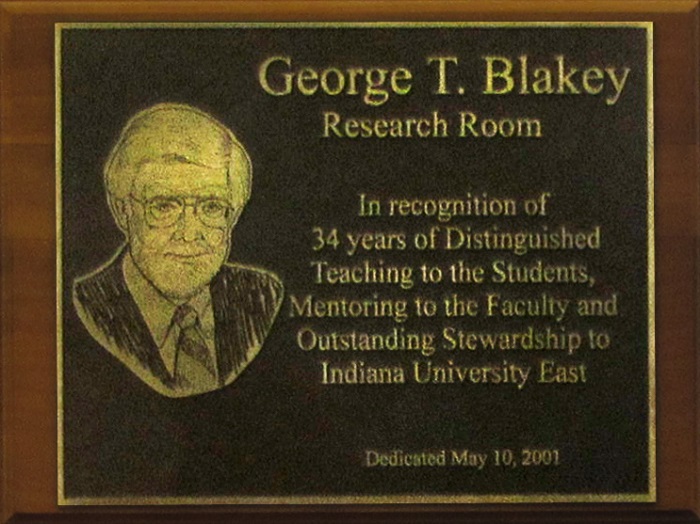 There will be a memorial service honoring Professor Blakey on Sunday, November 12th at 2 pm in Vivian Auditorium.