On January 15, 1818, Mary Wollstonecraft Shelley published her first book. Subtitled “A Modern Prometheus,” this book began as part of a storytelling contest among herself, her then-boyfriend Percy Bysshe Shelley, their host Lord Byron and Byron’s physician, John Polidori. In Geneva, Switzerland, on a particularly dreary summer night, the four precocious thinkers and authors began to compose ghost stories. Percy Shelley wrote about an incident from his childhood. Rumor has it that Byron’s work was about a vampire. But the other two people in this group, neither of them accomplished authors in 1816, launched the modern horror tale with their works: John Polidori’s The Vampyre, and Mary Shelley’s classic Frankenstein.

At the IU East Campus library, we are putting together a game based on Frankenstein. Librarians Beth South and KT Lowe attended a Quantum Leap/Indiana Humanities video game programming session on Friday, February 9, where they learned how to develop narrative-based video games using Twine. The video game, which is still in its early development stage, will feature an updated version of the Frankenstein classic taking place on the IU East campus grounds. The workshop was led by Anastasia Salter, assistant professor of digital media at Central Florida University. In addition to her teaching and speaking duties, she writes the Profhacker column for the Chronicle of Higher Education. 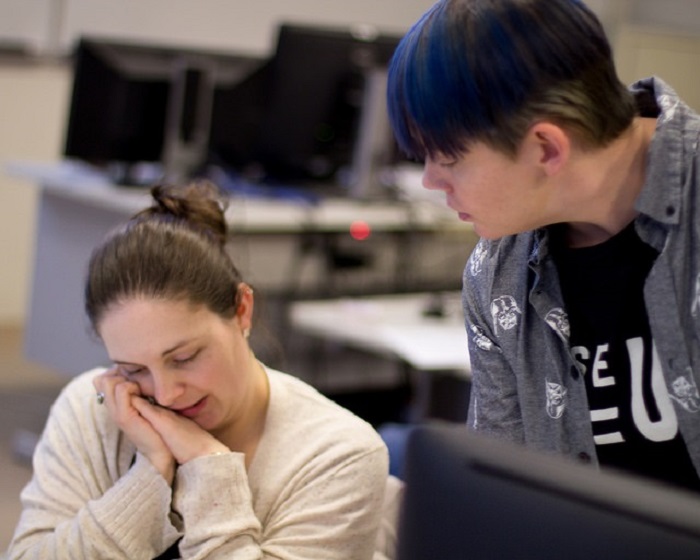 Twine was developed in 2009 by web developer Chris Klimas. It is open source software that responds to both HTML and CSS codes, but is intended for people who do not necessarily know much about designing web pages. If you remember text-based video games (such as Zork), then Twine games are an advanced version of these older-style games. Twine games fall between story and gameplay, however, and act much like Choose Your Own Adventure books – check out a few games like Invasion by science fiction author Cat Manning, or My Father’s Long, Long Legs by game designer Michael Lutz. The IU East game will allow players to take on the role of “Victor”, who in a moment of clarity realizes the implications of his creation, and must stop his work from coming to life. Players will visit every building on campus and interact with student clubs, staff and even one of the campus sports teams in order to thwart the worst of all conclusions from coming true. 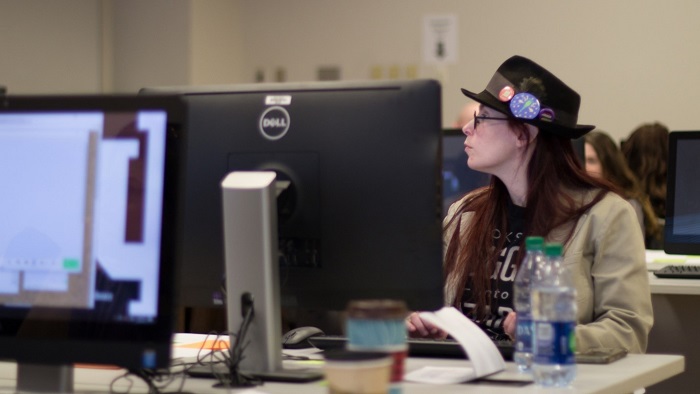 KT Lowe trying not to play games while professor Salter is speaking.

Why has Frankenstein endured for so long? The monster himself serves as a symbol for bioethics and the capabilities (and limitations) of scientific research. As a creature formed from without, embodying human fears, Frankenstein is also an extension of the Golem in Jewish tradition. It is the source material for comedy director Mel Brooks’ best film and one of the late Gene Wilder’s finest performances. Frankenstein’s author herself is a notable figure in feminist studies. Frankenstein also reveals the connections between self and other, demonstrating in literary form one of the ways in which humans react to differences in their environment and among each other. With such fascinating connections in a single book, it is a ripe source of inspiration that has carried on for generations, across multiple forms of media.

Interested in learning more about Frankenstein? Intrigued by the idea of designing video games? Want to learn more about interactive hypertext fiction? Ask us! liblearn@iue.edu