As IU East Archivist, Beth South is the go-to person to help guide you through the IU East Archives. Recently, she’s been researching Indiana University East’s mascots – the Pioneers and the Red Wolves. Flipping through all the past issues of the physical newspaper (we have more than 40 years of them!) she noted the paper’s name and logo changes, the articles, ads, and editorials. It is our most popular archival collection and provides the best record of the various events and developments that shaped IU East, so we wanted to share a brief history of the IU East student newspaper. 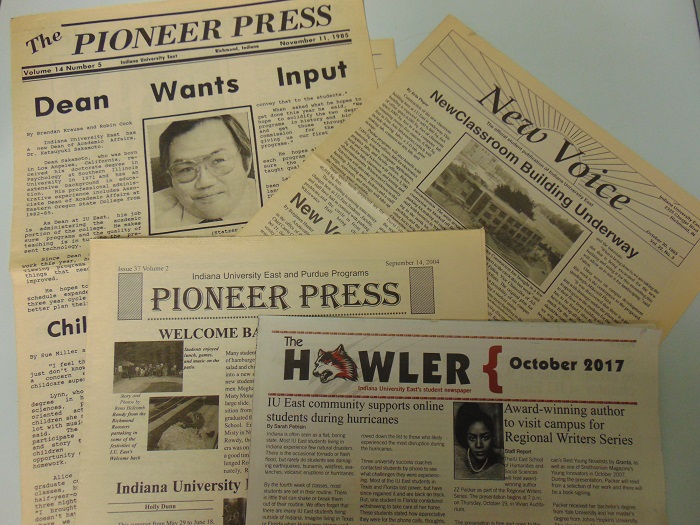 The student newspaper was a student organization, a club that had a faculty advisor and it regularly had call outs for students to work as reporters, editors, photographers, and managers. Even though IU East began in 1971, the student newspaper wasn’t organized until the spring of 1973. It started with a staff of seven and the first thing needed was a name for the paper, so they held a contest to “name your newspaper.” Janis Haines won the contest with The Pioneer Press, winning an IU-East t-shirt and $10 dollars. The first issue was released November 5th, 1973.  The Pioneer Press was originally published by students with funds provided by the IU East student senate. The views expressed in the paper were of the individual newspaper staff and not necessarily those of the student body, administration, or faculty. Students and local businesses were also allowed to take out classified ads in the paper. 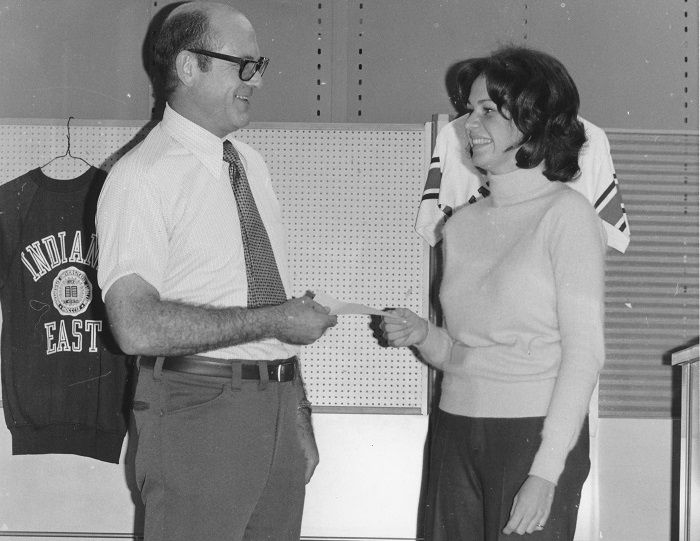 In September of 1987, the paper changed its name to the New Voice, in an effort to “rebuild the paper” and to jump start journalism at the IU East Campus as this was the beginning of the J290 Internship to Journalism class. The first issue of the New Voice provided introductions to IU’s new president, Thomas Ehrlich, and IU East’s new chancellor, Charlie Nelms, both whom started their positions of leadership in 1987.  While the Pioneer Press focused a lot on sports and IU East events, the New Voice offered more opinion pieces, comics, and letters to the editors. There was also a lot more humor and satirical pieces offered in the New Voice (Cassette, 1991).

In the fall of 1995, the August 28th issue held only a simple IU East logo on the front, with a notice that “the Indiana University East Student Newspaper welcomes students to fall semester 1995,” and a call for a new name and design. Similar to 1973, there was a contest to rename the student paper in an effort to “share ownership of the student newspaper” (“Name and Design…”, 1995). The winning name was The Pioneer with the tag line “Illuminating the trail to 2000 and beyond.” Debbie Kimbourgh submitted the winning name and design and they appeared for the first time on the September 11th, 1995 issue. Coincidentally, this name changed also occurred the same year a new chancellor was appointed for the IU East Campus, Chancellor David Fulton. However, the name The Pioneer didn’t last long as it changed back to the Pioneer Press the following school year and it remained the Pioneer Press until 2008. 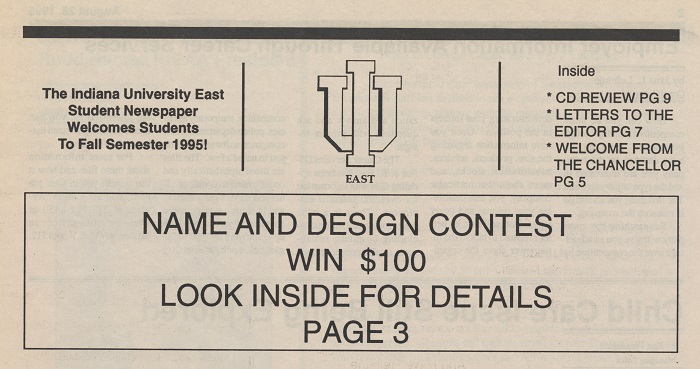 In 2007 and 2008, the IU East campus restructured its curriculum and changed its’ look and priorities under a new leader, Chancellor Nassar Paydar. IU East even had a new mascot, the Red Wolves, so the paper changed again in the fall of 2008 to the name it currently has, The Howler. The IU East student newspaper has ran almost continuously since it started in 1973. The only year or issues missing is January 2007 thru May of 2008. Most likely nothing was published due to the organizational changes of the campus during this time. The first issue of The Howler debut in August of 2008. The Howler is still a student written newspaper, although it now is housed under the IU East Marketing department rather than an independent student organization. Another main difference from previous years is that it is now published only once a month or every other month instead of biweekly. It is also the first of the IU East student newspapers to have articles available online at https://www.iue.edu/howler.

If you are interested in looking at the Student Newspaper Collection, please contact archivist Beth South at eabrockm@iue.edu. Either for fun or for research, the IU East Archives is open to students, staff, and faculty. You can also learn more about the IU East Archives collections at https://iue.libguides.com/iuearchives/home.