We’ve all seen it –  a magician in a top hat waves his wand and says the magic word Abracadabra.  Poof!  A rabbit appears!  A watch is restored to perfect condition after being smashed to bits!  The woman who was sawed in two is now whole again!  Wonders are associated with this word, but what does it really mean?

Abracadabra began its life as a healing spell.  It’s been traced as far back as the third century CE, when physician Quintus Serenus Sammonicus (better known as Serenus) wrote the treatise Liber Medicinalis.  This book documented, in Latin verse, numerous cures for common ailments, including the proper use of Abracadabra. 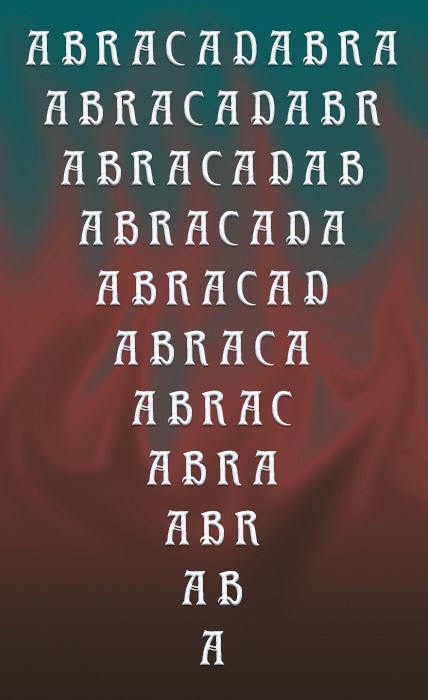 The proper use of abracadabra as a healing spell.

First, a scribe would write the full word “Abracadabra” on a sheet of papyrus or parchment.  Remember, paper was not introduced to the Middle East until the 8th century CE.  As the scribe was writing, he (most scribes were male, with some exceptions) would recite the word.  Then he would write the word again, but drop a letter off the end and pronounce it the same way.  Abracadabra became Abracadabr, then Abracadab and so forth.  When the scribe was finished writing, the work would be given to the sick person who ordered it.  That person would wear it as an amulet for 11 days, or the number of letters in the word abracadabra.  On the last day, the sick person would presumably be cured and would dispose the amulet.

What’s even crazier than a magic spell that has survived for almost two millennia?  The fact that, more often than not, it worked. 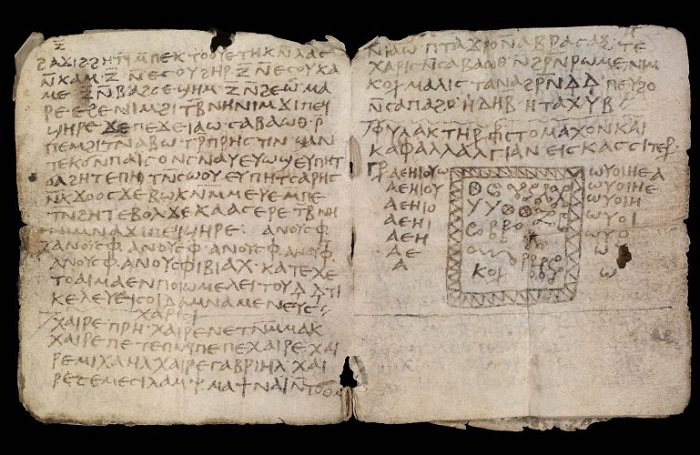 Abracadabra is a great example of two different phenomena.  The first is that many pre-modern cultures saw words as powerful tools of magic.  Language spoken as part of magic would be linked to objects in intrinsic ways – by saying the word, the speaker invokes what it represents and there is little separation between word and object.  While today we know that abracadabra would never work in and of itself, the placebo effect would have played a part in the spell’s effectiveness back in the 3rd century.

Another example of Abracadabra, this time from the British Library.

The second reason that abracadabra worked?  Plain and simple science.  Until the mid 19th century, humans had no idea what caused common maladies like colds, allergies and stomach flu.  Causes have been attributed to everything from an imbalance of “humours” to supernatural causes.  The truth is, the average cold only lasts 7-10 days and are caused by viruses.  A spell that lasts 11 days would therefore appear to “cure” colds, even though there remains to this day no remedy to get rid of them.  Correlation, in this case, does not equal causation.