With a documented history spanning roughly two millennia and traditions spanning across the world, Halloween is one of the most widely celebrated holidays in the United States.  It’s also an incredibly lucrative holiday, with this year’s spending total expected to reach $8.8 billion in the US alone.  Halloween, according to folklorist Jack Santino, is a holiday that is intended to stretch borders – those of exploration, identity, marginality and, in some cases, rules themselves.  The celebrations, which involve costumes, jack o’ lanterns, candy, horror movies and remembrance of the dead, demonstrate a great deal of syncretism, blending Celtic, Hispanic and American traditions into one magnificent event.

A mere sample of the Halloween-related items in the collection of IU East librarian KT Lowe.

The earliest Halloween celebrations began as Samhain, a Celtic holiday which marked the New Year.  The festivities were tied to a number of events linking life and death, such as honoring the dead and celebrating the end of the harvest.  When Christian missionaries arrived in what is now the British Isles and Ireland, they combined local traditions with their belief system, merging All Saints Day with Celtic Samhain.  The day before, when Mass was held, was called All Hallowe’en.  Interestingly, the effect didn’t work; the Celts doubled down on their traditions instead, placing only a thin veneer of Catholicism across the top.  The pull of respecting the dead, a tradition held in many different cultures, may simply have been too strong for any other culture to eliminate. 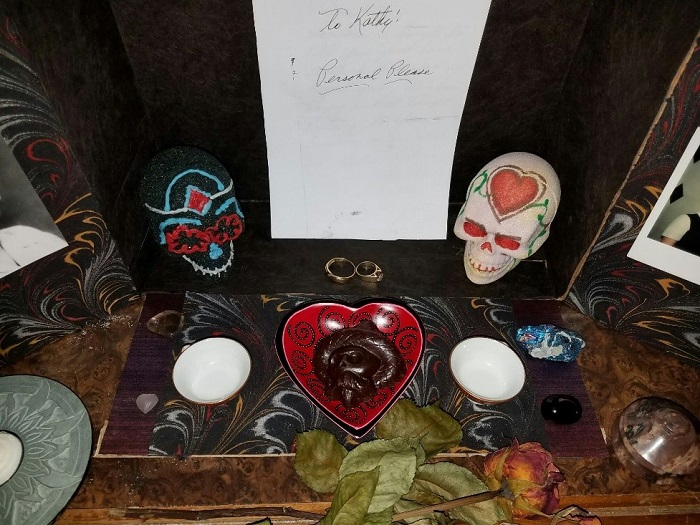 Part of a Day of the Dead altar featuring skulls made in honor of the parents of IU East librarian KT Lowe.

A similar case regards Dia de Muertos, the Day of the Dead.  Celebrated today in many part of the world where large numbers of Latinos live, Dia de Muertos has also been recognized by UNESCO as an important “intangible cultural heritage of humanity.”  With films like Coco and the Book of Life, the three-day holiday has become a staple of popular culture during the month of October. Yet it’s important to understand that Dia de Muertos, at least in North America, is a hybrid holiday combining indigenous Mexican traditions like ofrendas (altars) with northern Mexican customs like visiting the deceased at their graves.  A political element was added when Chicano activists in the 1970s began celebrating it in California.  Ultimately, however, the original focus of the holiday, that of respecting the dead and rejoicing in their lives, remains in place no matter how far it spreads. 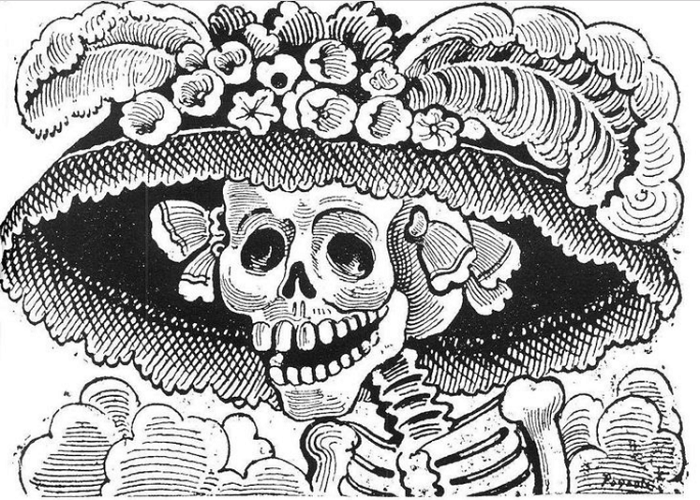 When Halloween migrated to the US with Scottish and Irish immigrants in the late 18th and mid 19th centuries, Celtic traditions such as jack o’ lantern carving retained their popularity, even most of their origin stories.  According to one legend, every year the devil challenged a man named Jack to a battle of wits.  Jack accepted, of course, and tricked him into transforming himself into a coin, getting trapped in a tree or taking other forms.  Whatever the devil did, Jack outsmarted him every time.  When Jack died, however, he was denied entry to the afterlife and begged the devil for a lump of coal to get home.  That coal was placed in a turnip, which continues to glow to this day.  The original jack o’ lanterns were made from assorted root vegetables.  When the traditions of Halloween arrived in North America, pumpkins with their large size and firm but malleable flesh became the perfect vehicle for carving. 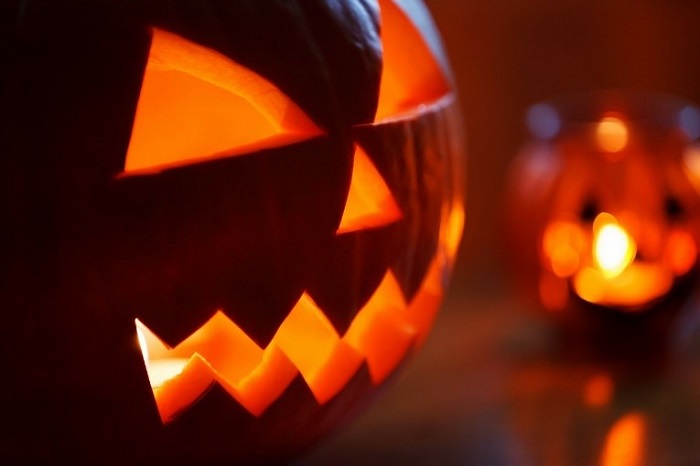 Other traditions have persisted as well.  Trick or treating began as a practice called “souling”.  Small currant biscuits or breads called “soul cakes” would be given to people begging from door to door in exchange for prayers.  This tradition, combined with mumming, or parading on costume, arrived in the US before the 1880s and was featured in holiday parades.  In the 1930’s, the term “trick or treat” becomes popular as the dual traditions were adapted to households during the Great Depression.  But postwar America truly takes on Halloween, with the addition of candy, parties, haunted houses and horror movies, giving the holiday the shape it bears today.

People with LGTBQ+ identities have embraced the holiday, especially in the US.  As early as 1932, the Woodland Park Auditorium in Lexington, Kentucky hosted what we would call a drag show today as a Halloween party.  Musician Lou Reed describes New York Halloween festivities in the middle of the AIDS epidemic in his single “Halloween Parade” released in 1989.  If anything, however, Halloween has become even more important in the days since.  “The main reason Halloween is a national LGBTQ holiday is the fact that being queer or trans is an extension of expressing who you want to be, in spite of who fears it,” writes Tyler Curry for The Advocate in this month’s issue.  Halloween, with its October 31st date, also falls within LGBTQ History Month

IU East also celebrates Halloween and Dia de Muertos throughout the month of October.  Beginning October 15, Dia de Muertos altars, which will be built by students in the Spanish program, will be featured in the Hayes Hall lobby starting October 15.  The Psychology Club will be hosting its annual Trunk or Treat on Friday, October 25 from 4:00 to 8:00 PM outside of Whitewater Hall.

Halloween remains an immensely popular holiday in the US and throughout the world, with a fascinating history that remains vital and exciting to this day.  Interested in learning more about Samhain, or the Roman customs which may have preceded it?  Curious about the LGBTQ connection to Halloween?  Want to know more about costumes and candy?  Or do you just want a good old fashioned ghost story to ring in the holiday?  Ask us!  iueref@iue.edu