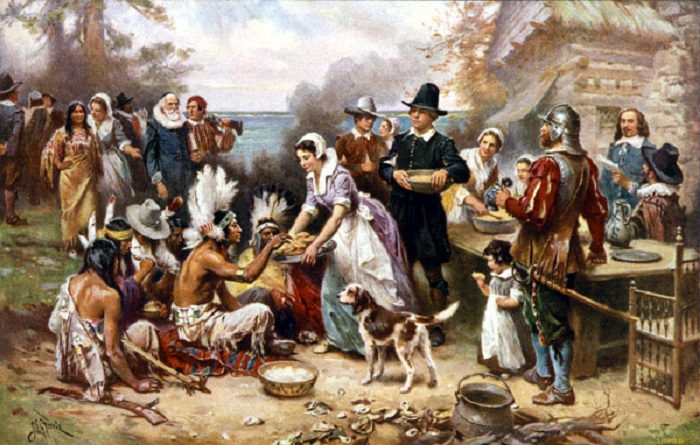 Campus is closed for the Thanksgiving break on November 28-29.  If you’ve watched the 1973 film ‘A Charlie Brown Thanksgiving’ and want to learn about the holiday beyond Linus’ speech, the library has plenty of resources to use.

To start, databases like American History Online offer plenty of primary sources, including the December 12, 1621 letter by Edward Winslow (a Pilgrim who attended the first feast) and George Washington’s 1789 Thanksgiving proclamation, along with articles, news, and more.  A free tool on the internet, the Library of Congress’s American Memory includes many other Thanksgiving resources, including more primary documents, artwork, and teachers’ tools.

AVON’s American History in Video collection and the Government Publishing Office offer many videos that relate to the holiday, from numerous Presidential Thanksgiving addresses to sound cooking advice.  You can even watch a turkey be ‘pardoned’ – one of America’s stranger Thanksgiving traditions.

The library holds plenty of books, as well, of both the print and electronic variety.  Interesting and informative choices include Thanksgiving: Its Origin, Celebration and Significance as Related in Prose and Verse by Robert Haven Schauffler, The Folklore of American Holidays by Hennig Cohen, Proclaiming Thanksgiving throughout the Land: From Local to National Holiday (in We Are What We Celebrate: Understanding Holidays and Rituals) by Amitai Etzioni, and Thanksgiving: Transcending Pilgrims Progress (in The Book of the Year: A Brief History of Our Holidays) by Anthony F. Aveni.

If you need any help finding resources, just Ask Us!  iueref@iue.edu