Mark Strand’s “Blizzard of One”: The Paper Crane of Poetry 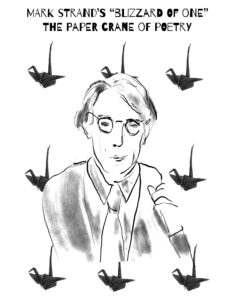 The poet who dares to look deeper into observations, because they mean more than a sight—that  poet can make origami with words. Recipient of the Pulitzer Prize for poetry in 1999, Mark  Strand’s Blizzard of One does more than mean something extraordinary: it does something  extraordinary with language. All good poems are expected to alter language or to play with it  through tone, meter, diction, and other literary elements. However, Mark Strand’s work  specifically demonstrates a pattern in telling a story or expanding an impression on time and place.

As a 2021 Summer Research Scholar at IU East, I was recommended by Dr. Brian Brodeur to read  this book and many other great poetry books such as Meditations in an Emergency by Frank O’Hara,  Things and Flesh by Linda Gregg, Rain by Don Paterson, etc. Some made sense to me when I read  them, some took their time, and a few are beginning to reappear in the hallways of my mind, like a  good painting I didn’t appreciate when I first saw it. Yet sometimes, words and linguistic  alterations make things fall in together when it is an absolute necessity. Blizzard of One made me  realize where my mind needs to go when I want to write, because it took me to W. H. Auden’s  quote:

“A poet is, before anything else, a person who is passionately in love with language.”

Mark Strand’s poems begin explicating the meaning of life: roaming Earth in “The Beach Hotel”  and dying, while witnessing humans taking each other’s place. There is so much contradiction and  possibility in travel, which is the main element in the first poem of the book. Then comes the great  order of things; the marvelous expansion of an impression in “Old Man Leaves Party.” Strand  discusses the impossible topic of age and connects it to nature. The Old Man’s body is an  occurrence in the time frame of one second, a moment after the party. A true paper plane.

Many of Strand’s poems in this book are a continuation of a moment, and that moment is one that  could be missed or disregarded easily. “The Next Time” is full of these moments that make the  reader open their third eye, the eye that is usually obtained by a painter. The eye that needs to  distinguish between cold colors and warm colors. But in this poem, that eye will help the reader  see the things that are unseen.

There is much understanding of the past because it is defined; because it has passed. Strand makes  it clear in this poem that there is a touch and a connection between what is felt and what is known.  Similarly, our impressions form themselves once their creation is finished. We do not understand  what has meant to us yesterday until it is tomorrow. Until it is “the next time.”

It is true that Mark Strand heavily weighs in on the specks of life that won’t return. He employs  words we forget, creating patterns that can be more powerful than a rhyming scheme in their order  and design. But the true fold of words and meaning occurs on a singular sheet in “A Piece of the  Storm.” Strand employs a great sense of possession:

“From the shadow of domes in the city of domes,

A snowflake, a blizzard of one, weightless, entered your room” (Strand, 1-2).

The shadows belong to the domes, but the blizzard belongs to the snowflake. There is great  juxtaposition in these two lines, yet the odd opposition of matter and value work together  exceptionally well. The heaviness of the snow is threatening and imminent, and nature is in  control. But we are still asleep, and “a piece of the storm” will vanish until “the next time.”

The true paper crane of a poem seems to be the one with all understandings and explications of  time, nature, humanity, and of course, the complexity of language. But “A Piece of the Storm” may  be the thousandth one.