Selections from the 2020 Issue: An Interview with Amit Majmudar 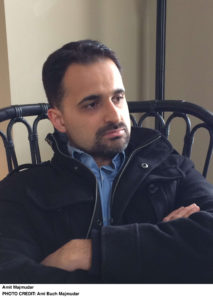 Amit Majmudar is a novelist, poet, translator, essayist, and diagnostic nuclear radiologist. Majmudar’s latest books are What He Did in Solitary (Knopf, 2020), Godsong: A Verse Translation of the Bhagavad-Gita, with Commentary (Knopf/Penguin Random House India, 2018) and the mythological novel Sitayana (Penguin Random House India, 2019). Winner of the Anne Halley Prize and the Pushcart Prize, he served as Ohio’s first Poet Laureate. He practices diagnostic and nuclear radiology full-time in Westerville, Ohio, where he lives with his wife, twin sons, and daughter.

This interview took place in 2019 via email with Jacoba Clouse.

You utilize meter and form as well as free verse with equal fluency. At what point in your writing process do you make the decision to use received forms such as the sonnet? Is it an issue of subject or tone that might call for a specific form? Are there instances when form seems more or less appropriate?

I’ll offer a preliminary historical note on vers libre. As Eliot practiced it, it was really a medley of prior verse forms, roughly juxtaposed. The phonetic runs of blank verse, rhyme, tercets, etc. of, say, Four Quartets, has the same fragmentary nature as the actual snippets of prior literature incorporated into The Waste Land. If practiced like that, free verse required, as its prerequisite, a mastering of or at least familiarity with meter and rhyme in practice; that is, it comes after you get the other ways of writing down. It is a “late” form both in the history of English language poetry and a “late” form in the poet’s technical development. This is no longer understood. Young poets arrive at free verse as their first stop; many never even try writing in meter and rhyme, much less failing often and failing joyfully at it, because they mistakenly locate it in the “past” of poetry.

All this is to contextualize answering your real question, regarding my choice to use one thing or another. I think different forms and ways of sequencing words have different effects on the reader; that is, strict meter is perceived differently by 21st century American readers than irregularly arranged sentence fragments. They infer a certain mood or state of mind in the poet from the former versus the latter. You cannot change this as an individual. There is no way to explain to a reader that, actually, this strictly metered set of quatrains was written in a whirlwind of feeling, while this nonmetrical unrhymed blotch of language was written in a state of cold calculation. They will assume the reverse. So I try to calibrate my virtuosity to the perceptions that I know will go on in my 21st century American readers. In the end, we are all out to create effects, we are sequencing words to cause certain neurons to fire in the minds of strangers.

When you use a meter such as iambic pentameter, how do you challenge or bend metrical limitations to accommodate the voice of the poem?

I don’t consider iambic pentameter to have any significant metrical limitations requiring accommodation. The few demands it makes are so modest and so close to spoken American English, and my own experience with writing in it so extensive, that I don’t register five iambs, with or without a substitution here or there, as any interference or limitation to whatever I’m trying to say. (In fact, I have to slow myself down with it; it greases my wheels.)

In your poem “To the Hyphenated Poets,” you address the dynamic of being a poet “joining nation to nation,” using beautiful images to describe the multiculturalism which furthers your audience and deepens your impact. I learned several things from researching your allusions. Is educating others about cultural difference something you intend to do or think about in your writing process, or is that simply the natural result of your identity as an artist?

Natural and unintended result. Everybody writes from their own place, culturally. I don’t write poems to educate anybody or improve anybody’s familiarity with the Other or anything. Poems of mine are getting taught more and more in colleges and high schools now, and while it’s flattering, I always hope that it’s not being force-fed to students in the spirit of Eat Your Diversity Vegetables.

How do the references you include in your poetry speak to social issues and current events? How can poetry inspired by traditions of the past comment on the present?

Sometimes I’m political, sometimes I’m not. Sometimes I focus on contemporary events, sometimes I wander in the mists of history and religion and mythology. Some widely praised poets are always doing the activist thing, it’s as though everything they write is a shot fired in some larger identitarian power struggle—but I prefer to mix it up. I am particularly off topical poetry recently, since all topical poetry subscribes to a rather narrow-minded, simplistic, America-hating Leftism, part of the general revulsion of academics and bohemians against Trump. I felt that too, but I don’t live in that state of mind, that would be letting the news media and clickbait journalists dictate my mental-health level. As for the past informing the present, I think that there is no great gulf between the past and the present. I recognize our fanatics when I read about the past—particularly those fanatics who think the present moment marks an irrecoverable break with traditional religions and cultures. Orthodox Christianity has survived the Bolsheviks, just as Confucius survived the Maoists. Those who think eternities will outlive those who think in five year plans.

In poems like “Abecedarian” and “1914: The Name Game,” you present witty retellings of historical or mythological events. What are some characteristics of stories you enjoy and find compelling enough to retell, and why? How can tales retold influence us culturally?

I think that history and mythology are the meat and milk of poetry. (Wait, correction, now that my wife is veganizing me: plant-based meat and almond milk of poetry.) I think the old stories have lasted for a reason: They have more pathos and passion than “real life,” particularly life during the Pax Americana, when so many comfortably bourgeois people voluntarily sip their daily traumas from a social-media feed.

The world destroyed itself during World War II, while America profited vastly, snapping up British naval bases. It warped everyone’s notion of what life is supposed to be. No one thinks what an absurd asymmetric amount of wealth allowed something like the GI Bill to exist: where returning veterans were packed off to study Browning and astrophysics. It’s unheard of in the history of warfare. Old Roman soldiers used to get two acres in cis-Alpine Gaul and even that was appropriated from some luckless peasant. Meanwhile, who ever heard of the Marshall Plan? Pouring gajillions of dollars into a country that you lost tens of thousands of men trying to subdue? America did all that because it wanted to combat Communism, but it could only do this because it had secured ridiculous, Ali-Baba-level amounts of wealth. The middle class ballooned. And the notion of the ubiquity of human misery and abjection became intolerable to these briefly blessed people. They forgot how that is universal throughout the history of the species. Memory was purged. Thousands of Americans owned two cars and ate one animal for lunch and another animal for dinner, and still they were pissed off they didn’t have more.

I am aware that I live in the first country whose poor suffer from a calorie excess. The diseases that kill us are diseases of living too long and eating too much. And still we hate what we are and have. Perhaps this is inevitable: That you will be granted paradise, but with flaws in it; and your mind will magnify those flaws until you perceive that flawed paradise as unmitigated hell. You will come to devalue it, to despise it because, as the Hindus knew, desire is infinite and hence discontentment is infinite. What’s most ironic is that those countries that people look to as paradises are also viewed as “socialist” paradises like Sweden or Denmark. But these are capitalist countries that exist as hothouse flowers, protected by American military hegemony, as Europe has been since the end of World War II. If the United States took its protective hand away, if it closed the military umbrella, then such countries, with their great public largesse, would be returned to the arena of history; they would have to manage their own defense against neighbors and remote empires projecting power; they would have to redirect their largesse to the ancient struggle for survival.

The only way out is to gain perspective and detachment; to slay desire and slay discontentment. I study and retell history and mythology because it helps me get perspective on my own contemporaneity. It is a religious pursuit. It takes me out of my own moment and out of my own identity. It links me with all people across time and across civilizations. It makes me treasure what I have and be thankful for it.