Shannon here again, and today I want to tell you about a couple of trips that we took last week. Tuesday, we went to see the Santa Maria Novella. This is the first great basilica in Florence and the city’s only Dominican (where the people have withdrawn from society or have become frugal in their material possession’s) church. The church itself is called a “novella” as in “new” because it was built over the site that the original church inhabited back in the 9th century. Construction started on the new building in the mid-13th century and the new church was consecrated in 1420. It was built using white and green (or Prato) marble from Italy. On the inside is based the basilica’s plan of the Latin cross. The ceiling is vaulted with pointed arches and has four buttresses in black and white. You will find many chapels situated around the main altar, each one in honor of a family within the church. Here, as in most basilicas throughout Florence, you will find many frescoes, paintings, and sculptures done by some of the most prestigious artists of the time. You will even find beautiful stained-glass windows that date back to the 14th and 15th century; but one thing that really stands out here is the wooden crucifix by Brunelleschi. As legend goes he was so disgusted by the primitive crucifix that was done by Donatello in the Church of Santa Croce Florence, that he made this one himself. In front of the church, Cosimo I would hold yearly chariot races which existed from 1563 until the 19th century. There are two obelisks in the square that mark the start and the finish of the race. It was set up to give the impression of an antique Roman circus.

The next site we visited was the Tempio Maggiore, or the Great Synagogue of Florence. It is touted as being one of the most beautiful in Europe and believe me it truly is magnificent. There are not the paintings, and artwork that we have seen in the other churches and museums; this has more of a humbling feeling when you walk in. It is the culmination of a long fund-raising campaign that was stated in 1840. David Levi, who was a member of the Jewish community, left a legacy to the campaign that allowed the construction to start in 1874. On October 24th 1882 the inauguration was held with many notables on hand including Rabbi Jacob Maroni, then the Chief Rabbi of Florence. This synagogue was an example of the change in the way of life and thinking of the European Jewish sector since the Emancipation. At the top of the synagogue is a central dome that was inspired by the Hagia Sophia Church in Constantinople. (The Hagia Sophia was actually a Greek Orthodox Christian church, then it became an Ottoman Empire mosque and today it stands as a museum in Istanbul Turkey.) The beautiful façade uses two different types of marble to harmonize with the surroundings and has two octagonal turrets between which are three horseshoe arched entryways. The interior was painted by Giovanni Panti in geometric patterns. The floor is done in inlaid marble and there are stained-glass windows all around. This area became one of the centers for Hebrew culture in Italy. To me, this was the most significant place that we visited as it is not like all the other “touristy” places people come to see. There are no Michelangelo’s, no Donatello’s, no Rafaela’s, no big beautiful statuary, or paintings that blow you way. It is just pure and simple elegance, fine lines, detailed woodwork, geometric shapes, elegance at its finest. Now that we have seen all of the great things that Florence has to offer, I must say that the Tempio Maggiore is by far my favorite. 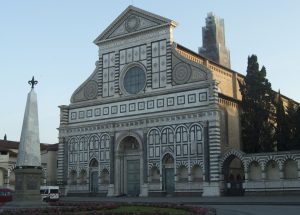 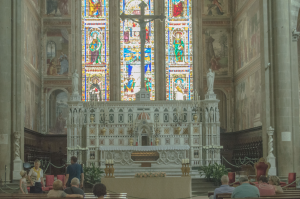 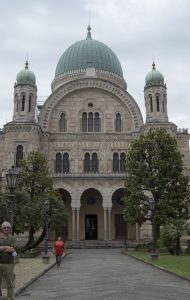 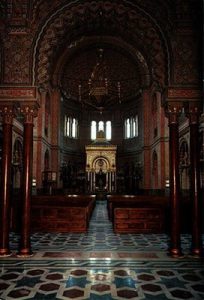