’Twas brillig, and the slithy toves

Did gyre and gimble in the wabe:

All mimsy were the borogoves,

And the mome raths outgrabe.

While many of us associate poetry with big words, flowery images and rhyme, there has always been a nonsense streak as well. The above poem, possibly Lewis Carroll’s most famous poem, is one of the best known examples of nonsense poetry. Yet nonsense poems, and Carroll’s in particular, often carry significant political undertones. For example, in Carroll’s “The Hunting of the Snark”, he tackles vivisection and the role of anthrocentrist activities in scientific pursuit. Jabberwocky itself may be a commentary on the notion of “meaning” – that is, according to Humpty Dumpty, words mean what he wants them to mean, but Alice’s sensibilities are more in line with what we non-Wonderlanders think.

It should be noted that nonsense, in its own way, also makes sense, and again Carroll’s work is an excellent example. In Jabberwocky, the unfamiliar words (“galumph”, “vorpal”, “gimbal” and many others) become familiar as the tale plays itself out. Further, Jabberwocky can be understood as a version of a heroic poem possibly imitating Beowulf– that is, a journey of a hero fighting a villain and triumphing in the end. Many of us are familiar with heroic poems, from Gilgamesh to the Odyssey, and the form itself helps us understand the action even if we do not know the words. 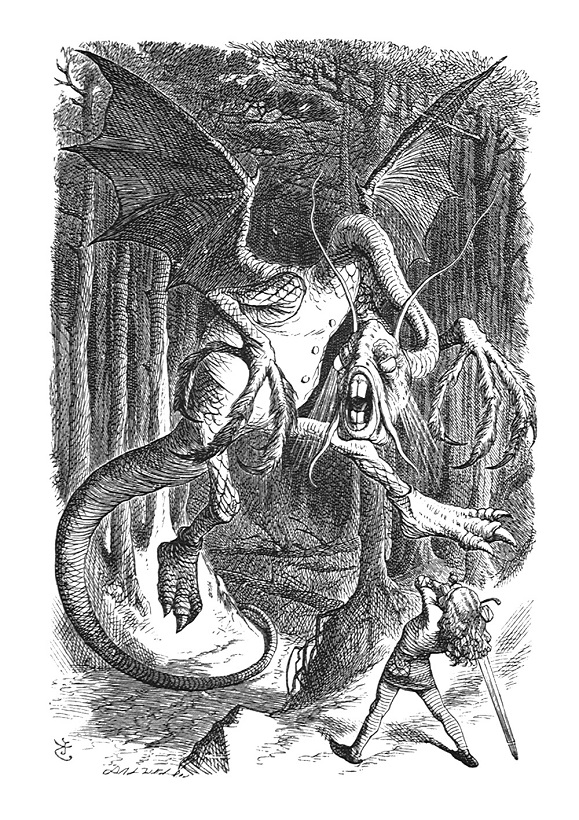 National Poetry Month, which takes place each April, celebrates all poems, from the staid and formal to the idiosyncratic and ridiculous. But this year, April also saw the first Student Writing Day on campus. Student Writing Day,, which took place on April 2nd, was an interdisciplinary celebration highlighting the very best of student writing on campus The library participated by inviting attendees to invent and define new words (with the assistance of a set of Scrabble tiles.) Some of the words appear to be portmanteaus, while others appear to eschew English language conventions altogether. Librarian KT Lowe then wrote a poem using all of the words that were contributed. 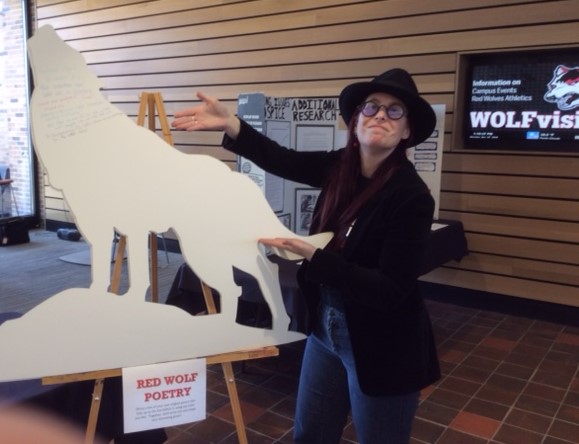 The story of Antony and Tixie

Antony was a snurier, in the wastes of Alberta

carrying a sicadar in his left hand

He was part of the Yurik Tramigo,

He played his guitar with a wegidor

(because it made a most muwsenf sound)

and sang of a girl with avodeao allure

a dralall voice and a silvery gown.

get off your phone and to me say

and maybe a quick sinotwe.”

But she was mean! “You roreall!

A higbdog is smarter than you!

I’d never dance the oigolie with you.”

Antony was crushed. A sevawlt

was too small to hide his shame.

Get firenpv and forget her name.”

Pleazaq consumed him as he forgot to eat

He tried motesia, but it was no good

No amount of beesoxu would cure him

Nothing could help him, nothing would.

But one day, he went to the Crawuyi

who told him of the law of shengin

He swung his lyrics round and round

then came back to Tixie again.

And it worked! Today they sit

on a creftlo perched hand in hand

And you can see her dancing the Oigolie

to the music of his Tet Gec band.

A word used to describe someone who is drawl (Jarred Dowling)

“See that wexibye over there?”

A state of confusion (Rhianna Trader)

A narrow space in which to hide things (Jessika Griffin)

The highest branch of a tree (Maggie Hatter)

An individual who is constantly on some form of technology, for example a laptop (Abbie Sliger)

A group of three amigos, similar to the three musketeers (Coty Barrett)

A type of monster that lives in the Caribbean (Olivia Engle)

A “Higbdog” is a highly intelligent space dog from the planet Grod. Higbdogs speak human and can solve quadratic equations. They are also fluent in dog-ish. (Jean Harper)

A bovine creature that lives in Russian woods (Travis Rountree)

Antiquated term for a particular type of servant who would traditionally accompany the coureur des bois, often assigned to transport snowshoes and other equipment (Tanya Perkins)

The stink of writing that doesn’t flow; rigged sentence structure that makes a reader question the writer’s thinking (Sharon Lucero)

A genotype from an avocado (Monique Vaughn)

Interested in learning more about poetry? Want to discover more of our resources on writing, poetry and literature? Curious about nonsense in general? Ask Us! iueref@iue.edu