“Science looks like magic, until you know how it works.”  That was one of the first things Dr. Joe Schwarcz said when IU East Coordinator of Library Instruction, KT Lowe, met him last month.  Dr. Schwarcz is the director of the McGill University Office for Science and Society, one of the best fake news fighting organizations in North America.  The OSS focuses primarily on the science of the everyday, busting myths about food, sunscreen, homeopathy and other quotidian things. 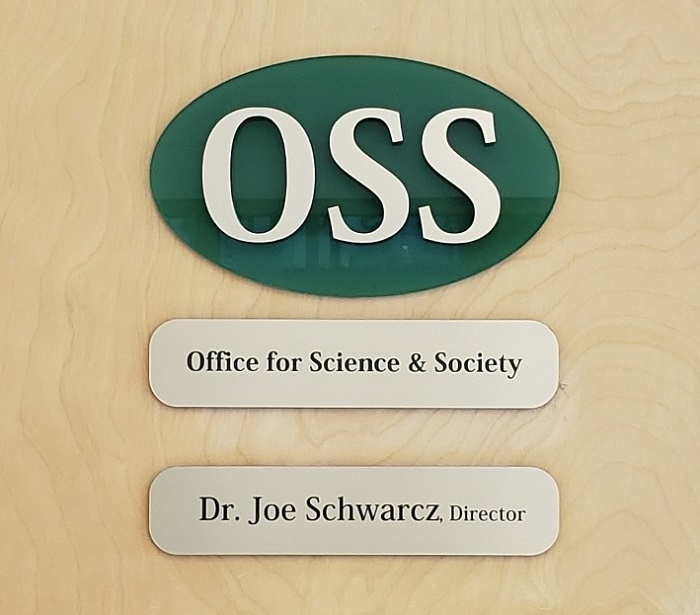 The room where it happens.

The OSS was formally established in 1999 and receives no corporate funding.  It is a formalization of Dr. Schwarcz’s work since the 1980’s, when he would speak with the media on all things science.  He and his team of communicators and advisors examine common claims, such as the UV protection found in sunglasses, Tylenol’s effect on empathy and anabolic steroids.  Dr. Schwarcz has also written a number of books on science and pseudoscience, including The Right Chemistry and Monkeys, Myths and Molecules.  Celebrating their 20th anniversary, the OSS hosts a number of events, including the annual Trottier Public Science Symposium.

A sample of Dr. Schwarcz’s output.

The work of the OSS has resulted in some important successes.  In January 2019, OSS profiled the homeopathic drug Oscillococcinum, touted as a flu remedy.  The problem with this drug?  There’s no evidence that it, or any other homeopathic drug, actually works.  The story was picked up by a number of news outlets, including the CBC, the largest broadcast network in Canada.  By May 2019, signs were placed in front of displays of Oscillococcinum stating its ineffectiveness.  Another video about a “miracle moss”, which was intended to highlight problems with information received via social media, went viral, with 6.2 million views on Facebook alone.

Fake news proliferates for a number of reasons.  One is “confirmation bias”, which is the idea that, if we want something to be true, we think it is true, and we ignore evidence that disproves it.  Unfortunately, this is just another term for wishful thinking.  Another reason, however, is harder to quantify.  It is difficult for scientists to categorically say that a phenomenon doesn’t exist – a glass of water is almost always safe, the sun rises every morning.  However, because good scientists include that possibility, however slight, that the glass might not be safe or the sun will not rise tomorrow, fake news purveyors and junk “scientists” will leap on that as proof that the science is wrong.  What makes science real is its evidence – tests, papers, experiments, observations and other proof that can be replicated and observed by others.  Good scientists put in the work to test their hypotheses and present their findings.  Science communicators, which is where OSS excels, take those findings and disseminate them to a broader public in terms they understand.

As a valuable tool for understanding all things science, the Office for Science and Society distributes a newsletter, videos and maintains social media feeds.  It should be among the first links you should consider when faced with fake news or dubious claims.  Need more information on figuring fact from fiction?  Want to know more about fake news?  Ask us!  iueref@iue.edu